Improving the health of Pakistani families through a common household staple: cooking oil

Food fortification is at the forefront of fighting malnutrition. Here’s how Nutrition International is bridging gaps to help streamline edible oil fortification in Pakistan.

Food fortification within the edible oil sector in Pakistan is nothing new. But until recently it was unreliable and inconsistent.

Pakistan mandated the fortification of edible oil and ghee produced in the country with vitamin A in 1965 through the West Pakistan Pure Food Rules. This mandate had the potential to improve the overall health of the general population in a critical way. Vitamin A strengthens immune systems against respiratory infections, measles and diarrhoea. Additionally, vitamin A deficiency is the leading cause of preventable nutritional blindness in children and night blindness in pregnant women. This mandatory standard for fortification could have impacted millions of lives.

But, despite the government’s best intentions, it wasn’t achieving widespread results. Pakistan’s 2011 National Nutrition Survey[1] reported more than 46% of pregnant women were vitamin A deficient. A study conducted in 2017[2] revealed just 19% of brands in the formal edible oil/ghee industry were adequately fortifying their product with vitamin A. Another 69% of brands were reported to also be fortifying their oil, but not up to the national standards. 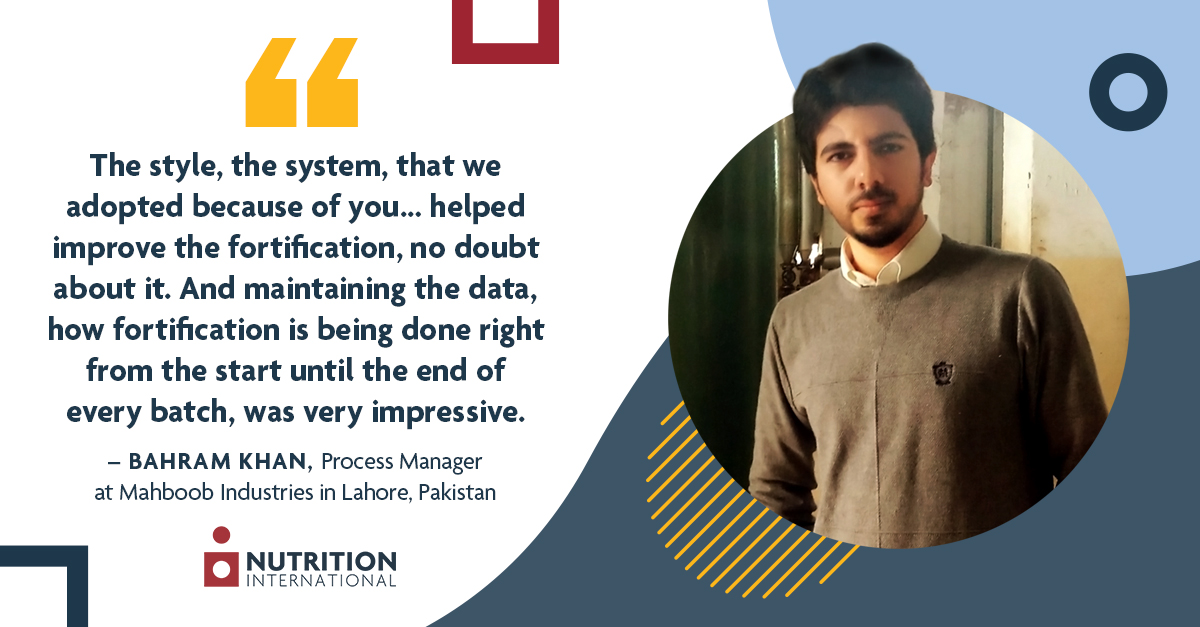 In 2016, a multi-stakeholder collaboration set out to revitalize oil fortification efforts in the country and improve the nutrition of millions of Pakistanis through their daily diet. Funded with UK aid from the UK Government, the Food Fortification Programme (FFP) was led by Nutrition International and Mott MacDonald in collaboration with federal, provincial and district governments and industry associations in Pakistan. The programme aimed to prevent malnutrition by fortifying wheat flour and edible oil/ghee with essential micronutrients. For oil/ghee, the programme set out to bridge the gap between regulations and enforcement, and build on the progress from 1965, including seeking agreement to add vitamin D to the fortification standard.

Over a period of five years, the programme gained the trust of the oil industry, capitalized on market economics, and helped strengthen regulations to harness best practices in global food fortification.

Why focus on edible oil?

Cooking oil is used throughout homes in Pakistan daily. It’s a reliable way to deliver micronutrients into the diets of those who need it.

Pakistan’s 2011 National Nutrition Survey highlighted almost 70% of pregnant women and 40% of children under five were vitamin D deficient, in addition to widespread vitamin A deficiency. The team seized the opportunity to address both deficiencies at the same time as each are critical to the health and wellbeing of individuals.

So, what was causing the gap between the 1960s mandate and the marketplace reality? Jurisdiction, limited resources, lack of enforcement mechanisms and engagement within the edible oil industry were among the key factors.

In 2011, food safety moved from being under the jurisdiction of the federal government to the provinces. Although the national 1965 Pure Food Rules set a guideline for fortification, there was no legal bindings of the standard or enforcement mechanism at the provincial level.

If it was going to bridge the divides preventing widespread fortification, the programme would need to build relationships and capacity between the millers who produce oil, the premix suppliers of vitamin A and D, and the governing food authorities.

Getting mills on board

Without the buy-in from mills, there was no way for the programme to succeed.

“At the beginning, millers where reluctant to extend support and enroll with the programme,” explains Zameer Haider, the National Programme Manager for Edible Oil Fortification at Nutrition International, who has worked with the programme since its inception. “One of their main concerns was security of their production data and potentially sharing it with government authorities without their consent.”

The team won the confidence of mills by explaining that the purpose of production data was to help inform decision making to improve the adequacy of fortification. Individually signed MOUs helped quell privacy concerns and fortify trust to pave the way for fortification. The cooperation and support from millers and the Pakistan Vanaspati Manufacturers Association (PVMA) became a driver for change.

Another obstacle was the actual process of fortifying.

“The partnership with the private sector is so important to the entire success of the programme. It affects everything.”

Most of the mills were not built with a fortification perspective in mind. The premix solution is heavier than the oil itself, so it needs to be diluted and then effectively mixed in, or else it risks sticking to the bottom of storage tanks and the process becomes pointless. The programme ran trainings and supported mills to retrofit their production design and installed dilution tanks where needed.

“Here, the fortification was being done, so that is not the new thing. The new thing was the style, the system, that we adopted because of you,” said Bahram Khan, Process Manager at Mahboob Industries in Lahore, where a dilution tank was installed. “That helped improve the fortification, no doubt about it. And maintaining the data, how fortification is being done right from the start until the end of every batch, was very impressive.”

In May 2017, 13 mills had enrolled in the programme. By the end of 2018, all 136 operational mills across all provinces were engaged. With participation secured, the question remained if fortification would continue once mills graduated from the programme.

A strategic subsidy served as an initial incentive for mills to purchase the premix needed for fortifying, but no subsidy was given to the premix suppliers directly.  Instead, invitations were floated for partnerships and then market dynamics led the way.

The initial subsidy to mills was phased out over a 24-month period. For the first six months, a mill could receive 20% of the cost of the micronutrient fortification premix. For the remaining 18 months, a mill was eligible for 10%. After two years, the subsidy was removed. The subsidy also came with conditions. Mills were only able to receive the subsidy once quality assurance of the product was confirmed — a third-party lab needed to show the oil to be fortified within the recommended limits.

“The interesting thing about the entire programme is the fact that it’s caused by a government-to-government agreement, but the success, the results, are all down to the private sector,” said Diane Northway, Team Leader and then Project Director with Mott MacDonald, referencing the initial agreement between the UK and Pakistan.

The programme was able to negotiate a better price for the premix from suppliers, due to the collective bargaining power of the number of mills involved. Premix suppliers were also responsible for setting up their own local supply systems that delivered the premix directly to a mill’s doorstep. Northway describes it as “sort of a double win” for participating mills, who were actively involved in each step. “The partnership with the private sector is so important to the entire success of the programme. It affects everything,” she said, adding that the team’s role was supportive in nature since the idea of fortification in the oil sector had already been introduced and was happening to some degree.

The first group of mills graduated from the subsidy incentive in 2019 and have continued to fortify their oil without the subsidy, as have all other cohorts since.

Without government backing and regulations the efforts made within the industry would be for naught. While the programme was actively working with mills, it was also engaging with all four provincial food authorities.

“The alignment between the provinces is really important,” says Northway. “Of course, oil crosses provincial borders. If one province is legislating for different standards, then other producers in other provinces might not be able to meet those standards.”

By 2018, harmonised regulations were in place across all four provinces. The next step was turning those standards into law. Provincial food departments and food authorities began developing bills that would secure oil fortification into the future. Bills have been drafted in all provinces and are in various stages of approval. Once confirmed, those laws will help institutionalize oil fortification into the production and enforcement processes of mills and government respectively.

This is reflected in mills themselves.

In addition to verifying results in a third-party lab, the programme worked with mills to test in-house and improve the overall process for quality assurance. The programme established a retail system for mills to purchase rapid testing kits. Mills are actively using these kits to check that the addition of vitamin A and D is within regulation before the product goes to market.

Where there’s a will

By January 2021, 95% of Pakistan’s mills were adequately fortifying their oil with the mandated amount of vitamin A and D. Supply chain data of the premix purchases suggest no indication that fortification will slow down.

A rapid assessment survey reported 72% of the national population consume oil/ghee from the formal sector. The programme estimates it’s impacting 68% of the population, over 120 million Pakistanis, who are using fortified oil in their homes.

Research is needed to confirm the impact of the programme on deficiency levels in the general population. In the meantime, there is still more work to be done.

95% of Pakistan’s mills are adequately fortifying their oil with the mandated amount of vitamin A and D. Supply chain data of the premix purchases suggest no indication that fortification will slow down.

Outside of those consuming oil produced through the formal sector, there remains 28% of the population who consume unprocessed oil sold illegally, but cheaply, in the informal sector. Nutrition International has effectively advocated federal and provincial governments to ban loose oil and is continuing to explore pathways to support enforcement.

Joel Spicer spoke at the official launch of the Food Fortification Programme in Pakistan (FFP) in Islamabad on September 8.