To advance nutrition we cannot ignore violence against women

Studies have shown that women consider the realities and possibilities of domestic violence when weighing choices about food consumption and distribution. 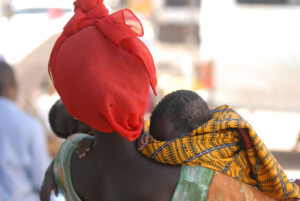 Some might say it is the elephant in the room; that thing which everyone can see but no one will talk about. We know that in many cultures “women eat last and least” − but have you ever wondered why? Studies have shown that women consider the realities and possibilities of domestic violence when weighing choices about food consumption and distribution, often choosing to eat less or lower quality foods rather than risk being beaten or subjected to other forms of violence. In other situations, men may deny women food as a form of punishment and as a way of exercising control; this is often accompanied by physical violence.

Attitudes towards intimate partner violence (“wife-beating”) has been tracked for the last 20 years in Demographic and Health Surveys (DHS) in low- and middle-income countries, along with many other indicators. Among the five reasons survey respondents give for why they feel violence might be acceptable, “burning the food” is listed as one reason justifying violence against a female partner. Harmful social norms concerning food and violence are so embedded that even many women feel they are acceptable. For example, in Ethiopia, the last DHS survey revealed that nearly 40% of women believe that it is justifiable for them to be beaten for burning the food.

In addition to its direct impacts on women, gender-based violence also affects children and child survival rates. According to UNICEF, one in four children under the age of five live with a mother who has experienced intimate partner violence. Households where violence against women occurs tend to have underweight women and children and there is growing evidence on the negative effects that exposure to violence has on child development and growth.

The relationship between nutrition and gender-based violence extends beyond household feeding practices; it impacts wider healthcare-seeking behaviours. Nutrition International recently conducted a sex and gender-based analysis in Kenya, which provided qualitative evidence showing how gender norms impact women’s abilities to make choices about their healthcare and can lead to violence in some instances. For example, when discussing women seeking family planning services one nutritionist stated, “without a husband’s permission, it will lead to violence [if she obtains this service without his consent].” Furthermore, if women come home late from the health centre, that also can lead to violence.

The last DHS survey showed an acceptance of intimate partner violence among 36% of men and 41% of women in Kenya. While this indicator is useful in providing a high-level overview of prevailing attitudes, unpacking the issue of violence against women requires deeper investigation at the community level. One finding from the qualitative analysis in Kenya is that community justice systems are heavily guided by community social norms and are culturally inclined. As much as these systems are intended to solve household gender issues affecting men and women, issues related to violence against women are often compromised.

Despite these realities, violence against women is rarely acknowledged or anticipated when designing nutrition programs. There is an opportunity to forge new partnerships between actors across different sectors who may not have traditionally worked together, including partners from social protection, health, nutrition, education, and local women’s rights organizations. This would create a holistic approach that acknowledges the links between these sectors and the lived reality for women, wherein all these areas overlap and influence one another in a woman’s day-to-day life. Our experience in Senegal has shown that nutrition can become an entry point for speaking about gender-based violence in contexts where this is a sensitive topic.

The good news is that attitudes and cultural norms can shift over time – a study looking at the trends in Nigeria indicates that between 2003-2013 there was a decline in the number of women who believe that intimate partner violence is justified. Similar trends are also noted in Kenya and Ethiopia. Interestingly, while reasons to justify “wife-beating” declined, the “burning of food” category did not shift significantly in the Nigerian context. What does this mean? Through awareness-raising, policy development, and programs focused on changing attitudes, it is possible to shift social norms overall. However, as we know from our work in nutrition, norms associated with food are often quite complex and require specific attention.

Every year, November 25 is recognized as the International Day for the Elimination of Violence Against Women. As an organization focused on delivering nutrition programming, we cannot ignore the devastating impact that violence against women has on the nutritional status and health and wellbeing of women and adolescent girls. Nutrition International is well-positioned to highlight these linkages and call for action to end violence against women. Such action would improve not only women’s food security and nutritional status but also promote their overall wellbeing and enhance their potential to flourish in all aspects of life.