Changing behaviours for an anaemia-free pregnancy in Indonesia

In the Manggarai Barat district of East Nusa Tenggara, midwife Rosina Flaviana Susianawati, popularly known as Osi, is leaving no stone unturned to ensure that women in her region have a healthy pregnancy, free from anaemia. 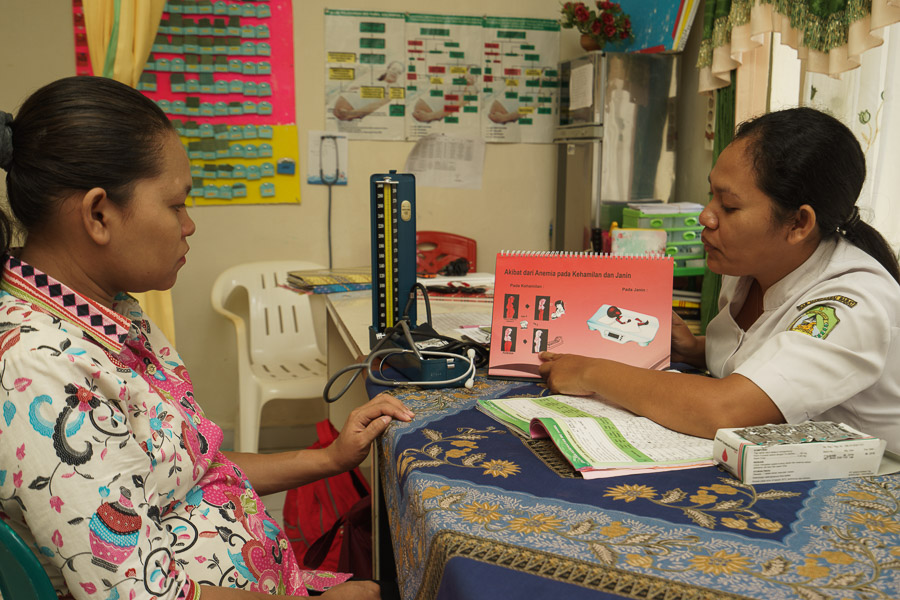 EAST NUSA TENGGARA, INDONESIA:  In the Manggarai Barat district of East Nusa Tenggara, midwife Rosina Flaviana Susianawati, popularly known as Osi, is leaving no stone unturned to ensure that women in her region have a healthy pregnancy, free from anaemia. Anaemia during pregnancy increases the risk of low birth weight for the baby. Her dedicated efforts to serve the community were strengthened by Nutrition International through an integrated micronutrient training organized as part of the MITRA program, running in the community for more than three years.

The training, which was attended by other midwives and health personnel, covered topics such as: the critical first one thousand days of life, anaemia, iron and folic acid (IFA) supplementation for pregnant women, vitamin A supplementation for children under five, diarrhoea treatment using zinc and oral rehydration salts, drug procurement and counselling skills. Additionally, the health workers were presented with a set of tools including flipbooks on IFA and zinc supplementation, dialogue cards, and interpersonal communication booklets which they could use when providing nutrition counselling for pregnant women and caregivers of children under five.

“The counselling skills learned during the training were very beneficial,” said Osi. “Earlier, due to lack of time, many midwives avoided counselling. In some cases when they did conduct counselling, it used to be a one way communication where she talked while the patient listened. But now, during the counselling session we have the flipbook in our hand which gives opportunities to engage with the pregnant woman. They are more active and ask questions based on the visuals they see in the flipbook. These tools also help us to be more focused in the discussion, as all of the key messages to be imparted are included in the book.”

Osi has been an active advocate for maternal health in her region. In fact, she was the first person to pilot the use of IFA monitoring cards. She says, “The IFA monitoring card is an effective tool to track the number of IFA tablets consumed by pregnant women and link it to monitor the improvement in their hemoglobin levels.”  Through use of these tools and regular counselling, Osi has observed a stark improvement in the hemoglobin levels among pregnant women.

“Once I counselled a seven-months pregnant woman whose hemoglobin was low. Before I would have advised her to take one IFA tablet each day,” said Osi, recalling the case of an anaemic patient. “But thanks to the training provided by Nutrition International, we learned that expectant mothers with anaemia should be given two IFA tablets every day. I advised her to take two tablets per day and by the time of delivery her hemoglobin had increased. Both mother and baby are leading a healthy life now. I feel so proud and delighted to see them.”

Osi has been a strong change agent in the community. Committed to take the cause of anaemia-free pregnancy and considering the benefits of the behaviour change initiative tools provided by Nutrition International, she advocated for the allocation of additional funds to print more IFA monitoring cards and flipbooks for distribution in more villages. She is sharing the best practices learned during the training and at her work place with many other midwives in the community. These are also being practiced at various sub-district, district, provincial and central forums.