Child Health Weeks in Haiti overcome obstacles to save lives

There is positive work being done by the Ministry of Public Health (MSPP) for the health and nutrition of Haitians, and the Micronutrient Initiative (MI) is a lead supporter of their Child Health Week (CHW) initiative. 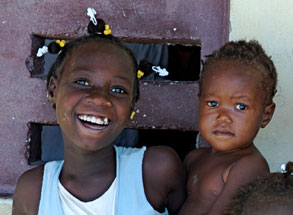 Haiti remains one of the poorest and least developed countries in the world.

Recently the country has struggled with more political upheaval, health crises including a cholera outbreak in 2010, severe environmental degradation and hurricanes.

Haiti also faced a devastating earthquake in January 2010, which reduced much of its capital to rubble, killing hundreds of thousands and leaving more than a million people displaced and living under tents and tarpaulins.

Despite such adversity, there is positive work being done by the Ministry of Public Health (MSPP) for the health and nutrition of Haitians, and the Micronutrient Initiative (MI) is a lead supporter of their Child Health Week (CHW) initiative.

Supported by the Government of Canada through the Canadian International Development Agency (CIDA), the Inter-American Development Bank (IDB) and several other donor agencies, MI is helping the Ministry to organize CHWs.

This initiative provides vitamins and minerals to children 5 and under and women of child-bearing age, catch-up immunizations to children and counselling on breast-feeding and information on cholera treatment centers to women. The basic package of services delivered through CHWs is one of the cheapest and most effective ways to decrease child mortality by strengthening children´s immune systems.

More than 20,000 Haitian infants die every year of preventable diseases such as diarrhoea and respiratory infections, and even those children that suffer only mild vitamin A deficiencies face higher death rates.

Supplementing children who do not get enough vitamin A in their diet helps to strengthen their immune system, protecting them against many diseases. Regular de-worming is also vital for children under 5 in countries such as Haiti where parasites such as hookworms and roundworms are common. These parasites can cause anorexia, anaemia, stunting, impaired intellectual development, and a greater susceptibility to disease as a result of weakened immune systems.

Complementary to routine health services, CHWs are a way to deliver preventive services to as many children under 5 and women of child-bearing age as possible.

During the second week of November 2010, despite the growing unrest that preceded the general elections, Haiti launched an extensive CHW campaign in six of the country´s ten departments to reach more than one million infants and to deliver supplies that would help contain the cholera outbreak. The MSPP also adjusted the timing of the campaign in each region of the country to best allow it to deal with the cholera outbreak.

Along with vitamin A capsules, de-worming treatments and vaccines, parents were given zinc and packets of oral rehydration salts to give to their children to treat episodes of diarrhoea.

The MSPP led the CHW, which was the first nationwide campaign in Haiti in five years, by using its own planning, monitoring and procurement systems and by coordinating the efforts of the many donor agencies involved. The CHW was made possible through a $5.5 million dollar grant provided by the IDB, which MI was influential in securing.

Staff at MI’s Headquarters in Ottawa worked hand-in-hand with the MSPP and IDB to develop the CHW project in Haiti.

MI’s clear support for a CHW Coordinator position to be created and advocacy for that person to work within Haiti’s MSPP was the catalyst that allowed MI to leverage funds and gain such a large commitment from IDB for micronutrient programming and health system strengthening in Haiti.

Because of MI’s support, a CHW Coordinator is now integrated as a full-time staff person in the Ministry.

She has greatly improved sustainability and long-term planning of the CHWs in Haiti, as seen by the fact that campaigns will continue twice annually for at least the next three years, which will further improve child health and reduce child mortality.

The Ministry has also formed a CHW Task Force by bringing together units such as Nutrition, Family Health, Immunizations, Monitoring and Communications to coordinate the different aspects of CHWs.

MI is proud to support the Haitian government’s Child Health Week initiative and thanks international donors such as the IDB and CIDA for their contributions to this important and life-saving program.