For Tibeltalech Kifle, a 29-year-old married mother with a daughter, life is anything but easy. For the past nine years, she has been a Health Extension Worker (HEW) in South Gondar, in the Amahara Regional State of Ethiopia. 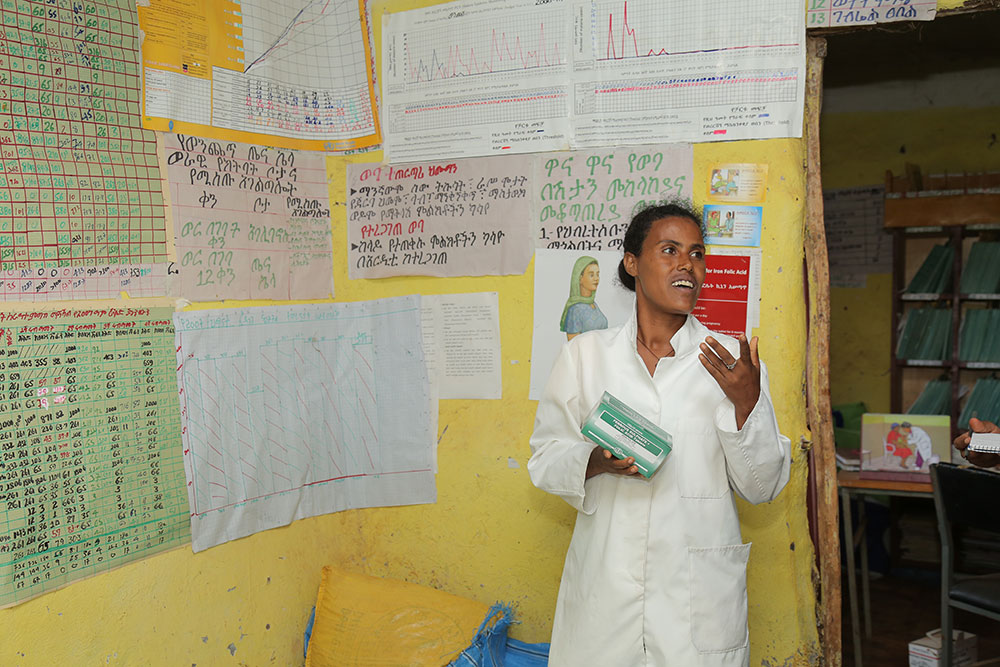 For Tibeltalech Kifle, a 29-year-old married mother with a daughter, life is anything but easy. For the past nine years, she has been a Health Extension Worker (HEW) in South Gondar, in the Amahara Regional State of Ethiopia.

Finding her place in the rural community was not easy.

For years, she would walk for miles each day to visit individual households in order to teach them about sanitation, malaria, immunization, family planning, and the importance of delivering babies at a health facility. Even though she was born and raised in South Gondar, she was often rebuffed by local residents.

As a result of her enthusiasm, commitment, and hard work, she now finds herself working in the health post of a flourishing community health program. This program, known as the National Health Extension Program, is receiving international attention, as it appears to be successfully contributing to the dramatic improvements in key health indicators in Ethiopia.

“I am very happy with the services that MI has helped to provide for us. I can be a witness: MI reaches rural communities and its work saves the lives of many children and women in the country,” said Kifle.

Kifle is just one of more than 38,000 HEWs working to improve the quality and availability of primary health care services in Ethiopia, particularly in rural areas, where more than 80 percent of the population lives. As part of the program, Kifle graduated from the Debretabor Health Institute after she completed tenth grade.

‘’I was inspired by health professionals when I was a child; I also would like my daughter to become a doctor.  In my village, there was a health centre and I saw health assistants who were dressed with white gowns and treated patients. This attracted me to the discipline and got me interested in helping people,’’ said Kifle.

Following to the third financing for Development Conference, which was held in Addis Ababa from July 13-16, 2015, a delegation comprised of representatives from MI, the Canadian Government, and UNICEF traveled to Bahir Dar and South Gondar to witness the work of MI on a grass root level. The first field observation took place at the Yewonchit health post, where Kifle works.

The delegation toured the facilities and was briefed by Kifle on the Ethiopian health system structure. Each health centre oversees five health posts, which make up a primary health care unit. The health posts are the backbone of the National Health Extension Program, but the Government of Ethiopia has also sought to strengthen the health centres to ensure the effective continuum of care.

Each health post serves a population of 5,000, while the health centre has a catchment area of about 25,000. The Yewonchit health post, however, provides services for the total local population of 7,766.

During the visit, HEW described their catchment area and the services that they provided ― both at the health post and in the community.

All these services are supported by MI, with funding from the Canadian Government through the Department of Foreign Affairs, Trade and Development.