Poultry pilot improved knowledge and skill on childcare and feeding 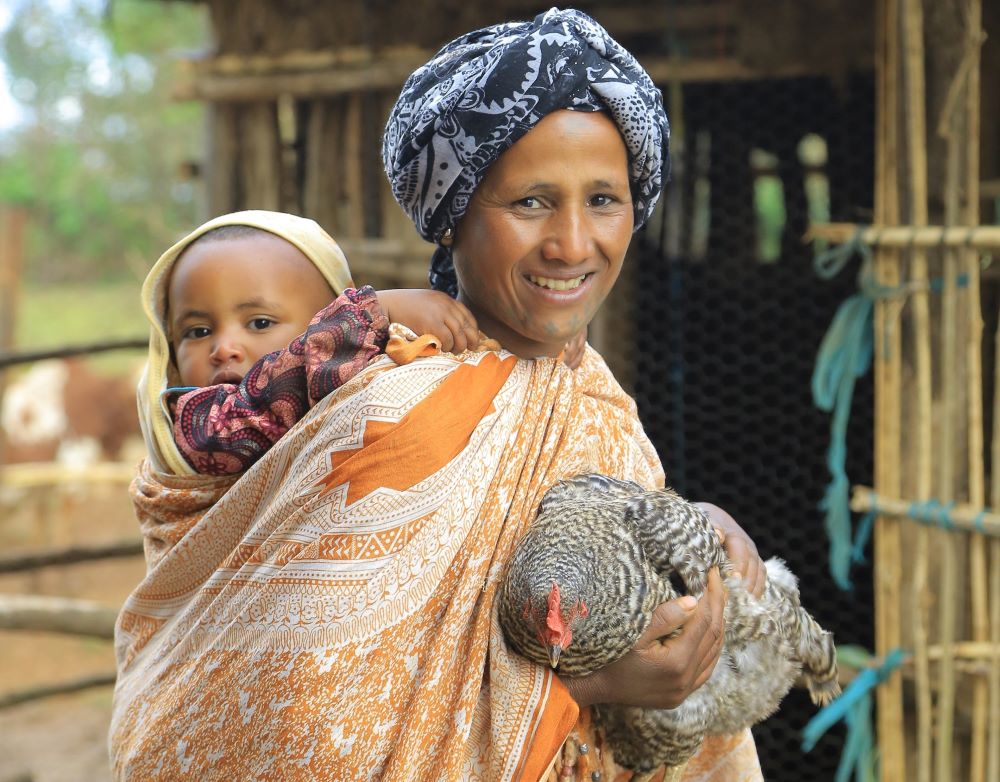 In the Debre Kelemo kebele in East Gojjam, families often didn’t have the knowledge or ability to ensure their children are fed an adequate diet. But a project supported by Nutrition International sought to change that.

The Infant and Young Child Nutrition-Poultry Pilot Project aimed to improve household egg consumption, primarily for children under two, and encourage the sale of extra eggs and chickens. Money made from the sale could be used to purchase other foods to improve diversity in the children’s diets and provide additional income for mothers to spend on other household necessities.

“After the project started and we received education, our household and our children’s feeding practice completely changed,” said Zuribet Abebayehu, a mother participating in the project. “Our last child feeds on at least one egg daily, and every day she consumes porridge twice which is prepared from mixed flour of cereal and legumes. Unlike my other children, my last child gained more weight for her age and she became very strong.”

The one-year project launched in January 2019 and provided 30 households of lower economic status with children under two with training on chicken care. The mothers of the household were provided basic training on chicken management, chicken house construction, chicken care, vaccinations, preparation of chicken feed from locally available grains at home, and preparation of children’s food using diversified food items.

“Before this project, I didn’t have the information on how to take care of my children and how to prepare their food, and their health condition was compromised,” said Zuribet. “However, there is a tremendous difference with my last child. The change is visible, and I am so happy for that.” 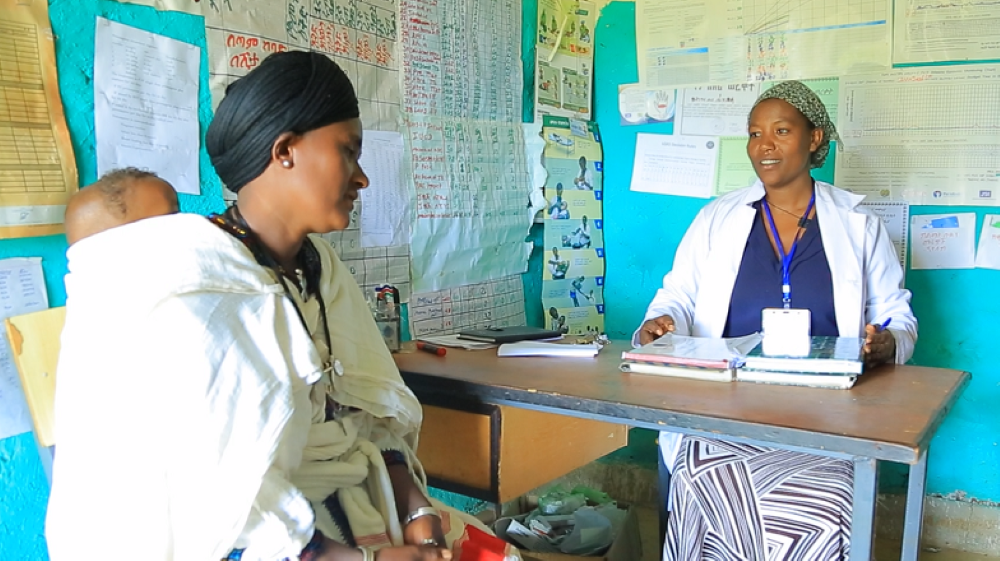 Dengeshta kebele is located in the Dangla woreda, about seven kilometres from the woreda capital. The kebele has two health extension workers, one animal production expert, one veterinarian, 36 health development armies and 214 mothers of children under two.

The kebele had high rates of malnutrition in children before the project started in 2017, largely due to mothers and health extension workers (HEWs) not having the necessary knowledge to provide adequate feeding and monitoring. The Nutrition International Amhara Development Association Infant and Young Child Nutrition (NI-ADA IYCN) project sought to solve this problem by providing training and education to health workers and mothers.

Before the project started in 2017, growth monitoring and promotion (GMP) was done only when mothers brought their children to the health post for vaccinations. Once children reached one year of age and completed their course of vaccines GMP did not continue.

After the project started, trained HEWs conducted household visits to ensure mothers correctly interpreted the information they received in the sessions. When a household fulfilled the minimum knowledge and skill set for optimal breastfeeding and complementary feeding practices, mothers graduated as a model, recognizing their progress. And, as a result of technical and material support, GMP continued past a child’s first birthday, with a separate registration book used specifically for the service.

“The Amhara Development Association IYCN project built my capacity and I was able to provide appropriate training to mothers on child feeding and food preparation,” said Mulu Ashagre, a health extension worker.  “Previously, less than 30% of children under two were growing optimally per the expected rate. Currently, more than 84% of children have reported appropriate growth.”

As a result of the project, 214 mothers participated in 12 groups, with 180 being recognized as model mothers, and 180 children received age appropriate feeding. Child feeding practices in the kebele improved, with more children receiving a diversified diet and more families leading a healthy lifestyle. 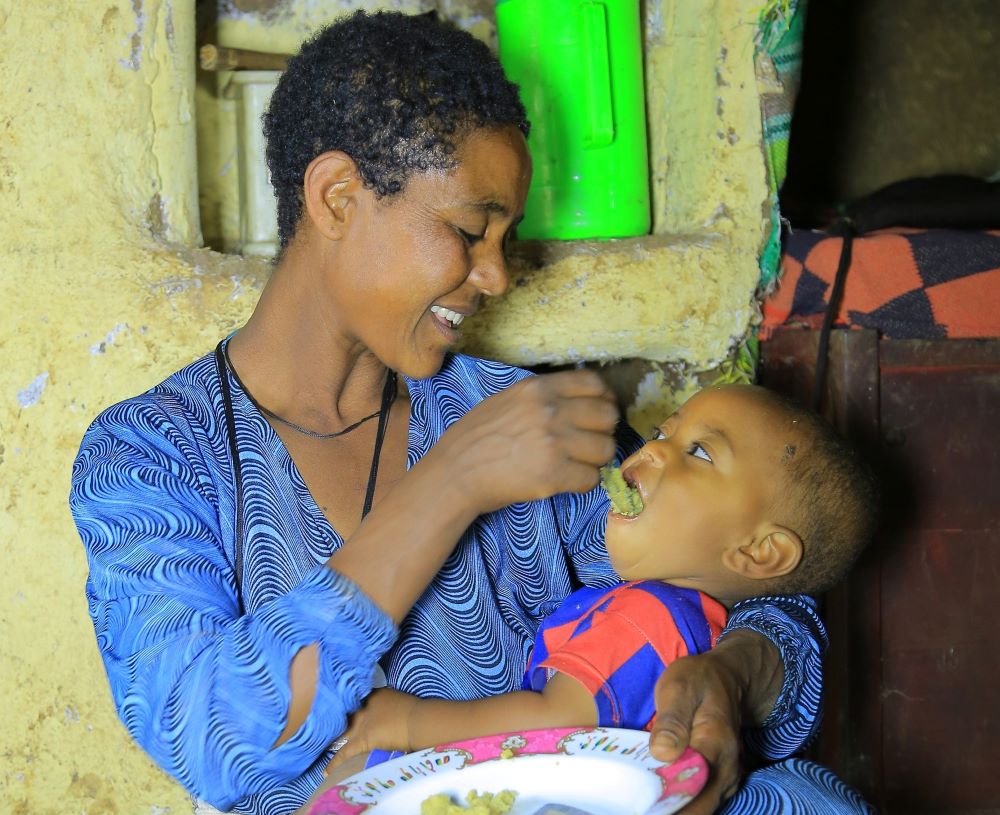 The Nutrition International – Amhara Development Association Infant and Young Child Nutrition (NI-ADA IYCN) project launched in the Dengeshta kebele of the Dangla woreda in 2017. Two years into the project, 30 households were selected for the poultry pilot.  The pilot project aimed to improve child feeding knowledge and practices, and improve egg consumption, primarily for targeted children. It also encouraged the sale of produce in exchange for other nutritious foods that are not available in the households, increasing diet diversity.

Since the launch of the NI-ADA IYCN project, health extension workers and mothers have been trained on optimal infant and young child feeding, and the importance of growth monitoring of children under two. Families selected for the poultry pilot also received basic training on chicken management, chicken house construction, chicken care, vaccinations for animals, preparation of chicken feed from locally available grains at home and preparation of food for children.

“We lacked knowledge about the importance of eggs for our children,” said Addise Zewudie, a mother of a 16 month old boy. “We constantly lost our chickens to scavengers and other wild animals. Since we were not keeping the chickens in a separate space, a significant number of eggs were laid outside and eaten by animals like dogs and cats. Also, in the previous time, we used to take the chicken for veterinary services only when they were sick. There wasn’t any practice of taking chickens for vaccinations at all and hence the new chicks were affected, which hindered their growth.”

The project provided information on how to prepare food for complementary feeding of infants, like the right mix of legumes and cereals, and enriching foods with eggs and other animal-source food. Participation in growth monitoring significantly improved and allowed for corrective action in the event of either weight gain or weight loss.

Households taking part in the poultry pilot received knowledge on modern poultry farming techniques and routinely vaccinated chickens every three months. This system led to an increased number of eggs being hatched. The overall wellbeing of children consuming these eggs greatly improved, including gaining the ability to walk earlier.

“My family has benefitted from the knowledge passed,” said Addise. “Our home is free from communicable diseases and our productivity has significantly increased.”