Vitamin A: a Canadian child survival story in Kenya

Vitamin A supplementation has played a significant role in reducing child deaths in Kenya and around the world. 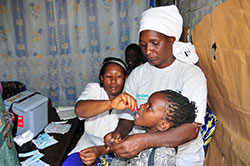 Health care volunteer Virginia threads through the alleys in the Lunga Lunga slum of Nairobi. “There’s a school here we must get to,” she says. “There are children there that need the capsule and the shot.”

She leads a nurse and another health worker to the Heroes’ Academy, where dozens of three and four-year-old children welcome them.

Virginia speaks with the teacher and checks children for marks on their fingers. Those children without marks will be getting a measles vaccination and a dose of vitamin A today. Many tears will be shed.

Virginia’s quest to reach these children is part of an immunization and vitamin A supplementation “mop-up” campaign to reach children who haven´t been reached by the Kenya Ministry of Public Health and Sanitation´s routine Malezi Bora campaign.

Vitamin A supplementation has played a significant role in reducing child deaths in Kenya and around the world. Twice annual supplementation for children in vitamin A-deficient regions helps boost immune systems to better fight off deadly childhood diseases such as measles.

What started as an exciting Canadian-led initiative 20 years ago – to take on the scale-up of a nascent but promising health intervention – has developed into a core element of child health programs globally.

Today, vitamin A supplementation programs reach as many as 80 percent of the world´s children and experts say that this simple, inexpensive intervention has led to millions of lives saved.

Each vitamin A capsule looks simple, but is in fact a technological and organizational marvel. Costing a mere two cents to manufacture and roughly 50 cents to reach a child in need, each vitamin A supplement must survive transport to some of the world´s most remote locations. Even then, the success of this global effort rests in the hands of an army of dedicated health workers, like Virginia and countless others, in communities around the world who are committed to progress.

Over the past two decades, with Government of Canada support, the Micronutrient Initiative has procured 8 billion vitamin A capsules and, working closely with national governments and many other partners including UNICEF, has ensured that every year vitamin A programs reach more than 200 million children in need in approximately 70 countries.

Over the years, vitamin A programs have evolved from being an add-on activity, delivered during National Immunization Days (NIDs), to being an integral part of systematic, integrated child health events. As health systems are strengthened, vitamin A programs will be increasingly incorporated into routine health care services, allowing children to receive their first dose as soon as they are six months old.

What was once a fledgling program has become a flagship Canadian success story, and a powerful child survival legacy.