Joel Spicer spoke at the official launch of the Food Fortification Programme in Pakistan (FFP) in Islamabad on September 8. 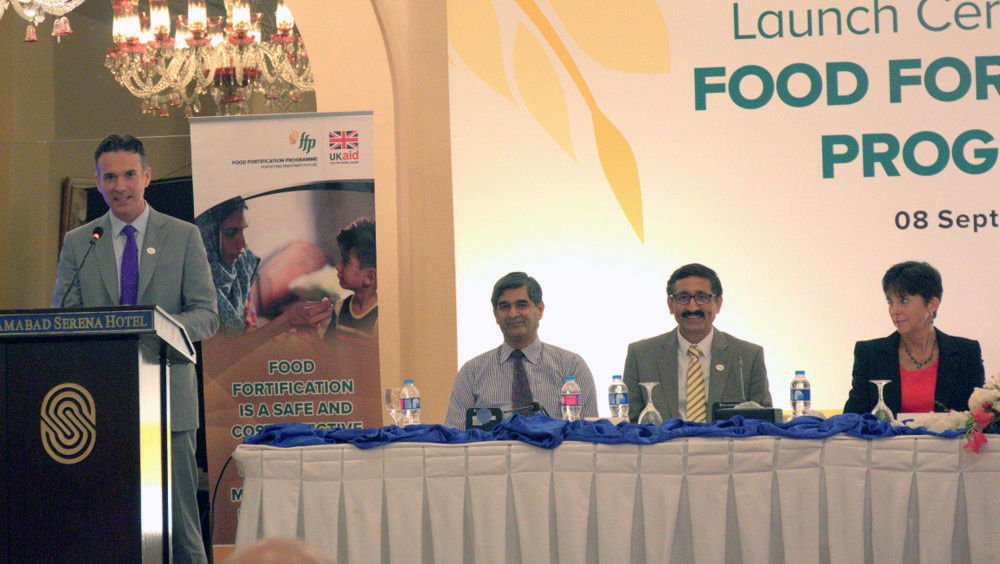 I am honoured to be here with all of you to launch the Food Fortification Programme or FFP.

This is an exciting day, because today we are launching an initiative that will reach more than two thirds of Pakistani people with improved nutrition and unleash the potential and the power of Pakistan’s next generation.

Distinguished guests, ladies and gentlemen, as-salamu alaykum. A big welcome and thank you for coming together today to celebrate the launch of Pakistan’s FFP – what we believe to be the largest Food Fortification Program of its kind.

The reason we are able to launch this program today is because of the joint leadership of Pakistan and the United Kingdom and their collective commitment to achieving global goals, and a world free of malnutrition.

Also, from DFID: Joanna Reid, the Head of Office in Pakistan, and her team members in Nutrition and Health – Chris Athayde and Meredith Bradbury.

And thank you to Jack Eldon –  Project Director from Mott MacDonald – a tremendous ally and partner, as well as to Diane Northway, FFP Team Leader, and Dr Tausif Janjua, Technical Director, Food Fortification Programme and one of MI’s stars.  Having excellent country level champions like Dr. Baseer, the Director of Nutrition, and Dr. Shaheen, the SUN Focal point, are also critical success factors in this endeavour.

Finally, I would also like to thank the flour milling and edible oil/ghee industry leadership, particularly Pakistan Flour Millers Association and Pakistan Vanaspati Manufacturers Association, for their strong commitment to address micronutrient malnutrition.

This is an “all hands on deck” approach that includes partners, all levels of government across multiple ministries, as well as the private sector. This project, and this group of champions, recognizes that improving nutrition is the key to developing human potential.

The sheer scope, ambition and impact of this ground-breaking initiative, which will reach more than one in two Pakistanis with wheat flour, oil and ghee fortified with essential vitamins and minerals, is testament to the success that can happen when:

The food fortified by this project will reach a very large number of people in Pakistan –- so let me unpack what that really means.

It means, for example, that every year, by the time the program is fully scaled-up, the number of women and children in Pakistan who suffer from the debilitating effects of iron deficiency anaemia will be reduced by one third.

This is important because anaemia is a chronic form of malnourishment affecting women here, and around the world.

Today, one out of every two Pakistani women is malnourished – a condition that not only affects her health, but also the health of the next generation. Anaemia contributes to pre-term births and low-birth weight, which in turn leads to poor child health outcomes and an increased risk of disease later in life.

This project will also aim to reduce neural tube defects (or NTDs) among newborns – protecting them from paralysis or other life threatening or limiting disabilities. This means they will now be freed to pursue opportunity, because they are born with the capacity and potential of any other child rather than being held back by this limitation.

Finally, and critically, FFP has been designed with government and partners at the forefront. It’s about long-term sustainability and results. So the impact will be sustained long after the project concludes.

I also want to stress the impact of this initiative stretches beyond health.

Nutrition investments have been identified as the single most cost-effective development investment in the world.

While the human costs of malnutrition are tragic and incalculable, the economic costs are also massive. Malnutrition costs the global economy $3.5 trillion every year. Yet every dollar invested in nutrition can yield an additional $16 in economic benefits.

So, FPP will not only yield important results for human health in Pakistan, it will also help drive productivity and economic development.

Despite the evidence, malnutrition, continues to be on the rise in every country in the world. It is clear that global leadership is needed to make nutrition a development priority.

FFP is an example of the kind of leadership and ambition that is needed. And in this way, Pakistan and the UK have set the bar for others to aspire to.

At the Micronutrient Initiative, we are happy to be working alongside Mott McDonald, who have also developed a long term relationship of trust over many years with Government partners, and bring complementary skills.

We also feel privileged FFP builds on MI’s 15-year-history of partnership and leadership on nutrition in Pakistan.

For example, over the past decade, MI has worked closely with the government, the food industry, and many other partners to secure incredible progress in the drive to scale up the effective iodization of salt.

We are proud this collaboration has resulted in an increase in household utilization of iodized salt from 17% in 2001 to almost 70% ten years later.

In concrete terms it has meant a decrease in severe iodine deficiency in mothers from 37% to only 3% and among school-aged children from 23% to 2%. These kinds of population-level results are helping to pave the way forward for the future of Pakistan.

In addition, since 1999 and with the support of the Government of Canada, MI has provided more than one billion vitamin A capsules to children under five, saving lives and improving the health of millions of Pakistani children.

While we know that much more needs to be done to end malnutrition in Pakistan, Pakistan can be proud of – and build on – these nutrition success stories.

In 2015, world leaders pledged to end all forms of malnutrition by 2030 as part of the Sustainable Development Agenda. It is a bold goal, whose achievement will depend on political will, leadership, financing and innovative approaches to reaching the most vulnerable. FFP brings all of these components together and shows the world how Pakistan is forging ahead, demonstrating leadership, and carving out new pathways for impact.

Working together, FFP will make a critical contribution to freeing the people of Pakistan – particularly women and children – from the burden of malnutrition. At MI, we stand with all of you, and will continue to be your partner and ally to make this vision a reality.