A colleague recently reminded me that, not so long ago, our nation’s capital was losing the fight against a hard-hitting enemy – the mosquito. In the 1820s and 30s, the most significant cause of death among workers who built Ottawa’s historic Rideau Canal was malaria. The scourge was at its strongest when our knowledge about its causes and our ability to prevent and treat it was weakest. 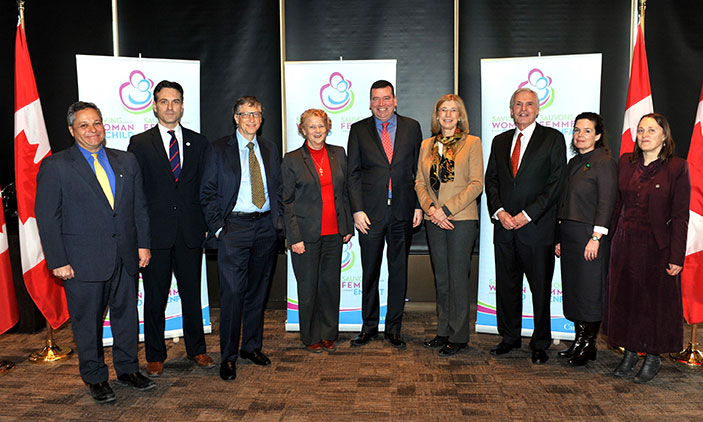 (L – R) Peter Singer, Joel Spicer, Bill Gates, Dorothy Shaw, Minister Christian Paradis, Jennifer Blake, Ray Chambers, Andrea Lucard, Patricia Erb. © DFADT | MAECDA colleague recently reminded me that, not so long ago, our nation’s capital was losing the fight against a hard-hitting enemy – the mosquito. In the 1820s and 30s, the most significant cause of death among workers who built Ottawa’s historic Rideau Canal was malaria.[1]  The scourge was at its strongest when our knowledge about its causes and our ability to prevent and treat it was weakest.  Over time, we learned what was causing it (mosquitos), how to prevent it (draining swamps and screening windows), and how to treat it (quinine and next generation anti-malaria drugs).  This knowledge fueled a determined effort to eliminate the disease, which was achieved by the turn of the 20th century in Eastern Ontario.

While malaria is no longer a problem in Canada (so much so that most have forgotten we ever struggled with the disease) – it remains a major killer in the developing world, particularly of children.  Despite impressive progress in reducing malaria deaths by half since 2000, there are still close to 200 million cases every year, and last year 437,000 children died from the disease.  It doesn’t have to be this way and there are renewed efforts to build momentum towards a world free of malaria.

Last week during a visit to Ottawa by Bill Gates, I had the privilege to join other leaders of development organizations in the Canadian Network for Maternal, Newborn and Child Health (CAN-MNCH) for a private discussion on a “Malaria Endgame” – essentially a playbook for ending malaria. Together with Ray Chambers, the United Nations Secretary-General’s Special Envoy for Financing the Health Millennium Development Goals and for Malaria, and Christian Paradis, Minister of International Development and La Francophonie, among others, we drilled down on ways to move faster towards malaria elimination in the next decade.

It was not by accident that the conversation on ending malaria took place with a group of experts united around maternal, newborn, and child health (MNCH) because efforts to combat diseases like malaria are integral to MNCH efforts.  In fact, it’s a sign of real progress in global health that conversations like this are coming together across areas that are too often separate.

Take, for example, the link between malaria and nutrition. Children are far more likely to die of malaria if they are already malnourished. We know that over half of malaria deaths for children under the age of five – 57.3 percent – are related to malnutrition. When we save a child from malaria but they succumb to malnutrition, we have lost. And if they survive but are anaemic and undernourished, their ability to grow, develop and learn is at great risk, compromising their futures. We have then lost a generation. All too often, we miss opportunities to address undernutrition in populations vulnerable to malaria, and we miss opportunities to address malaria in nutrition efforts.  This is a symptom of a much broader issue in a field that is still struggling with silo’d structures, funding, and agendas.

The challenge is we increasingly have the knowledge and evidence about what is needed and what works but the level of integration on the ground is not yet to the point where we can say we are translating that knowledge effectively into action.  We are still missing opportunities and those we exist to serve are paying the price.

There is much more that can be done to close this gap. Now is the time to accelerate our efforts where progress has been slow to seize every opportunity. Essential components to achieve this goal include breaking out of existing intervention silos; creating new and innovative ways to resource our efforts; and focusing on how to get more impact from those resources.

Canada made a concerted effort to end malaria deaths in this country a century ago and is now supporting efforts to do the same around the world as part of its leadership on MNCH. I’m optimistic that the discussion around ‘no missed opportunities’ and translating that discussion to integrated action on the ground – combined with the leadership of important champions in Canada and around the world – will help move us much more quickly towards a world free of preventable deaths among women and children and one free of diseases like malaria.