Reaching the last mile in universal salt iodization in Pakistan 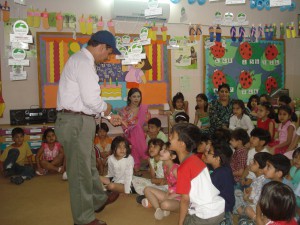 In 2003, as National Program Manager for Nutrition International (then the Micronutrient Initiative) in Pakistan, I had expressed the organization’s dream to raise the national rate of household consumption of iodized salt in Pakistan, from 17% to at least 80%. At the time, large populations of both women and school-aged children suffered from iodine deficiency, and the country had one of the lowest rates of household utilization of iodized salt in the world, with only 17% of the households consuming iodized salt. 16 years later I’m happy to report that according to the country’s recent National Nutrition Survey, 79.6% of Pakistan’s households consume iodized salt (84.4% in urban and 76.7% in rural regions). As we celebrate this achievement, I reflect on my time with Nutrition International and our role in promoting Universal Salt Iodization (USI) in Pakistan.

Iodine deficiency disorders (IDDs) cover a spectrum of developmental and intellectual disabilities, as well as stillbirths, congenital anomalies and increased perinatal mortality. Unattended iodine deficiency may cause permanent and irreversible damage to the intellectual performance that can impair academic and physical working capacity. A study of children up to one-year-old in rural India indicates that access to adequately iodized salt contributes to increased height-for-age by 0.664 Z-scores and increased height by 1.845 cm.1 In India, another study found that the country’s nationwide iodine fortification policy has increased the probability of attaining basic numeracy and literacy skills by 2.67 to 5.83% for primary school-aged children.2 The study concludes that mandatory USI until at least age two increases the likelihood of children recognizing simple numbers and letters by 1.9 to 4 percentage points at ages five to seven.3

My relationship with Nutrition International started in the year 2000. At that point, the organization was starting its projects in Pakistan and I helped establish the Pakistan office. Slowly the size of our team grew from one, to eight, to now more than 130 staff members. Our initial focus was on IDD control, vitamin A supplementation, edible oil and wheat flour fortification, and multi-micronutrient powders programs.

As our first order of business, we collaborated with the government in creating the National Plan of Action for Prevention of Micronutrient Malnutrition in partnership with other development partners. In 2002-03, we supported the government in completely revamping the existing IDD control program to include a new USI program. USI is the intervention recommended by WHO to address IDD in the general population. Iodizing salt can eliminate iodine deficiency and is the most cost-effective and sustainable method of complementing dietary iodine and improving the iodine status of the population. A teaspoon of iodine is all a person requires in a lifetime, but because iodine cannot be stored for long periods by the body, tiny amounts are needed regularly, and thus iodized salt is the optimal solution to this issue, as salt is consumed daily and universally.

We identified barriers to the original program’s success and then tackled them one by one. At that time, the main obstacles to the success of the national IDD program were an irregular supply of potassium iodate, limited capacity of salt processors, absence of a quality control system, and inadequate monitoring of compliance by salt processors. We mapped out the salt industry in Pakistan to understand where the suppliers were based. Then, we planned to gradually scale up the reach of the IDD program, with the first phase including the 20 most endemic areas for IDD. By 2012, we built the program up to include all 110 salt-producing districts in Pakistan in collaboration with the government, salt industry, WFP, UNICEF and other partners.

Around the time that we began implementing USI as part of Pakistan’s national IDD program, nutrition policy came under the mandate of the National Program of Primary Health Care and Family Planning in the country. After some major challenges with communicating the right messages about the effectiveness of salt iodization to the public, the Government requested Nutrition International to lead the work on USI. So, in addition to our primary focus of building the capacity of the salt industry in iodized salt production and strengthening government quality control and quality assurance and enforcement system, Nutrition International also led USI advocacy programs through seminars, radio programming, and training of health workers and in classrooms.

Over the years we worked on spreading awareness about the harmful consequences of IDD, building the capacity of the salt industry in Pakistan, and established measures for effective monitoring and evaluation to develop strict quality control and enforcement systems. Between 2006 and 2018, as a result of the revitalized USI program:

I commend the government’s leadership and the coming together of all the actors in making this happen, and I am incredibly proud of the work Nutrition International has done in Pakistan. It has been a success story, and we hope to reach 100% consumption of USI in the coming years.

However, we must note that IDDs remain the leading cause of neurological and intellectual disabilities affecting over two billion people worldwide.

As we recently passed Global Iodine Deficiency Disorders Prevention Day, I would like to call on policymakers to reflect on this issue: about 14% of the world’s population still does not have access to iodized salt!6 This means that more than one billion people are at risk of IDDs. Reaching the last mile will be tough, and while Nutrition International is committed to providing technical support to countries that aim to establish or scale up their USI programs, I encourage governments of those countries to take ownership of USI programs as a means of achieving the Sustainable Development Agenda targets by 2030.