A sensitization campaign to overcome male stereotypes and boost vitamin A coverage for children aged 6 to 59 months is seeing results.

Prior to December 2020, Alphonce Maduhu had never taken his children to receive their vitamin A supplementation (VAS). It was always his wife’s responsibility.

“In the Sukuma culture, all work related to taking care of children is a woman’s role,” said Maduhu, reflecting on cultural barriers that initially prevented his involvement. “It [would be considered] a shame for a man to take children to the health facilities as I will be laughed at by other men in the community. They will say that I am being ruled by my wife.”

Maduhu and his wife are farmers in Tanzania. Two of their children under five occasionally missed previous doses of vitamin A because they didn’t prioritize accessing supplementation over pressing farm work. But Maduhu’s mindset started to shift in November of last year.

Community leaders in his village of Lagangabilili directly encouraged men to participate in initiatives taking place during the government’s Child Health and Nutrition Months (CHNM). This was part of a targeted sensitization campaign organized by Nutrition International and the Government of Tanzania to improve biannual uptake of vitamin A supplementation for children aged 6 to 59 months. Vitamin A supplementation is a proven low-cost, high-impact intervention that protects children against childhood illnesses and reduces the risk of preventable deaths for children under five.

Since 2019, Nutrition International has been supporting the government and local health units across six regions to intentionally promote VAS awareness among men to achieve higher coverage rates in the country. “Women were the ones taking children to healthcare services to receive those provisions of vitamin A supplementation,” said Lawrencia James, Nutrition International’s child health and nutrition program officer in Tanzania. But, she noted, “The man, the father, has the power to decide whether the family goes for health services or not.” Increasing awareness among males was critical to increasing coverage overall.

“They first felt shame because caring for children belongs to women.”

Anatory Nyahunge has been a community health worker in Lagangabilili village for the past four years. He has witnessed the transformation fathers go through when they are sensitized to gender roles.

“They first felt shame because caring for children belongs to women,” said Nyahunge. But without their participation, fathers were a bottleneck for families to access critical health and nutrition services.

In preparation for the vitamin A distribution in December 2020, Nyahunge directly engaged men like Maduhu. During market days, healthcare workers shared behaviour change materials and emphasized the importance of fathers to seek VAS services for their children. Radio clips featured a man as the main character seeking services. Where mass media wouldn’t reach households, community leaders were approached to become influencers within their local areas.

Maduhu heard about the December VAS campaign from a local leader in his community and was encouraged by the community health worker in his area. When the time came, he decided to be the one to bring his two children to receive their vitamin A dose, carrying them with a kanga the way mothers traditionally do. He held his two-year-old son, Maleni, in front and his four-year-old daughter, Elina, on his back. 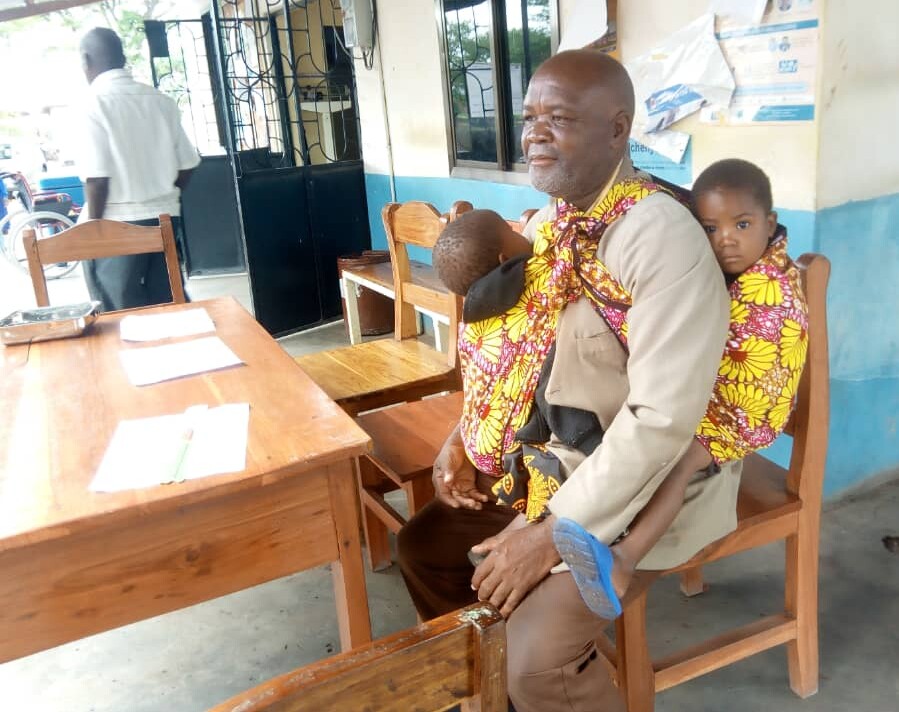 “What motivated me is that I wanted to support the growth of my children and help them receive health benefits as a father,” said Maduhu. “I am very grateful for these services that are providing children with vitamin A. At first, it was very difficult for men to bring our children to health facilities, but the encouragement from village workers and our neighbourhood leaders really attracted us and today you see us here bringing children for care.”

With exposure, Nyahunge said male attitudes are shifting. “With time, they [men] are wondering why they are not also responsible for their children. With time, they want to be involved in all health issues for their children.” In addition to micronutrient supplements and routine vaccinations, the CHNM activities also included cooking demonstrations in which Nyahunge was able to get men to participate. “Engaging them in planning brings good change to the community,” shared Nyahunge. “They [dads] are becoming agents of change.”

“What motivated me is that I wanted to support the growth of my children and help them  receive health benefits as a father.”

“Involving men, not only in the health sector, but also in other issues, is gender equality work. They are becoming part and parcel of issues within the family, and not only the deciders,” said James. In addition to fathers working with their partners to ensure their children access key health and nutrition interventions, more men are also taking an active role in household work, such as cooking for the family or helping to collect water.

Nutrition International is currently conducting a more detailed analysis of gender norms in Tanzania to inform future programming directions. While the specific opportunities to systematically address gender barriers and promote gender equality have yet to be identified, there is no doubt that involving men like Maduhu will continue to be an important part of the work moving forward.