When H E Hassen Abdulkadir was posted as Ethiopian Ambassador to Senegal, he never expected to become so interested in producing and iodizing salt. 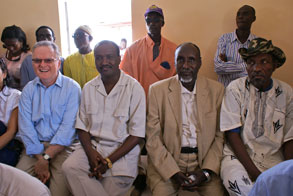 When H E Hassen Abdulkadir was posted as Ethiopian Ambassador to Senegal, he never expected to become so interested in producing and iodizing salt.

Hassen is from the Afar region of Ethiopia, a hot desert area in the north-east of the country, wherein lies one of the largest inland saline lakes in the world, Lake Afdera.

Salt ponds dotted around the shore of the lake supply almost 100 per cent of Ethiopia’s salt. Unfortunately, less than 1 per cent of all the salt produced there was being iodized. This is important because women need to have adequate iodine early in pregnancy for the brain development of their children, and in many areas of Ethiopia they cannot get enough iodine through food.

“I did not know how important iodine was for brain development and how important it was for children to achieve in school,” explained Hassen. “But it didn’t take me long to become convinced that we needed to step up our efforts to iodize the salt we were producing.”

But getting salt iodization going was not easy due to obstacles related to disagreements in how salt should be iodized, by whom, where and at what cost.

To find out how some of these issues had been resolved elsewhere, Hassen visited successful salt iodization programs in Senegal, where salt producers are working together in cooperatives.

“Once I saw how players could work together, I knew we could start successfully iodizing salt in Ethiopia,” Hassen said.

Hassen hosted an Ethiopian delegation in Senegal to showcase how different stakeholders work together for effective iodization, a program supported by the Micronutrient Initiative, with funding from the Government of Canada through the Canadian International Development Agency (CIDA). CIDA has been one of the largest donors to Universal Salt Iodization over the past two decades.

A major breakthrough came from facilitating dialogue between national and regional governments which helped clear up some misunderstandings.

High-level officials from the Afar region, the Federal Government and those with a stake in the salt industry came together to work out how the iodization process could best benefit all Ethiopians. Partners in the process included MI and UNICEF.

“From there, we have been working together to ensure the smooth progression of setting up iodization at the point of production,” explained Hassen. “We are hoping that very soon all of the salt leaving the Lake Afdera area will be adequately iodized.”

Thanks to the determination of key government players, including Ethiopian Minister of Health Dr. Tedros Adhanom Ghebreyesus and his Deputy Minister Dr. Kesete Berhan Admasu, the Government of Ethiopia published its new legislation on the mandatory iodization of salt on March 25, 2011.

It will now take the commitment of all partners, behind a strong government lead, to ensure the adherence and enforcement of this legislation and progress for health, education and economic development.