Souleymane was struggling to make ends meet in Dakar, Senegal and decided to return to his home community of Ndiémou to try his hand at salt harvesting. 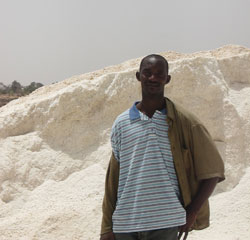 Souleymane was struggling to make ends meet in Dakar, Senegal and decided to return to his home community of Ndiémou to try his hand at salt harvesting.

As an entrepreneur, he was chosen to be part of an MI-supported microenterprise project, which included business development training and help guide the loan process to fund his idea to increase salt production and salt iodization.

Souleymane underwent business training, developed a business plan and purchased equipment and land plots to expand and improve the management of his salt production field.

His hard work paid off, as he now employs over 60 people, mostly women, and has a thriving salt production business with multiple plots. All the salt he produces is adequately iodized and is sold in Senegal and throughout West Africa. 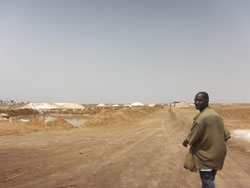 Senegal is the most important salt producing country in West Africa. The salt produced here is sold in countries throughout the region; ensuring the salt is iodized means reducing the risk of iodine deficiency disorders for millions of people.

MI works primarily with smaller salt processers in Senegal, those who sell their salt at a lower price or barter and trade it for other goods, often to poorer families and communities who are the most vulnerable to micronutrient deficiencies.

In 2012, MI supported 1,000 Senegalese salt harvesters in the production of 74,000 MT of adequately iodized, reaching more than 4.4 million people in the region and protecting 166,000 against the permanent brain damage caused by iodine deficiency. 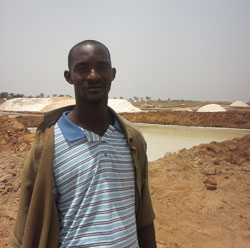 With the support of the Government of Canada, MI also works with producers like Souleymane to organize into formal microenterprise groups, allowing them to share the costs of iodization equipment and potassium iodate.

This helps producers reduce costs, ensure continued availability of crucial supplies such as potassium iodate, gives them access to a larger market and ensures that iodization is consistent while providing labour opportunities for hundreds youth from surrounding villages so they can stay in their own communities where they have support networks, rather facing the uncertainty than moving to Dakar. It’s an economic development model that makes a significant impact on health.

Souleymane says that he is most proud of being able to employ the women who work for him and to see the benefits on their families and in his community as a whole.

As the business grows, his employees can feed their families, buy schoolbooks and improve their quality of life. His hope is that, as the business moves forward, he can increase the modest wage his employees earn and provide them with more safety equipment.