On April 26, 75 adolescent girls who are part of the Shornokishoree Network Foundation (SKNF) in Bangladesh came together in Dhaka to launch Nutrition International’s ‘With Good Nutrition, She’ll Grow Into It’ campaign, which highlights the critical link between good nutrition and empowering girls to grow, learn, earn and lead, all while challenging gender norms and stereotypes.

Adolescent girls all around the world have big dreams. Yet for too many, obstacles and limitations place these dreams out of reach.

For Priyanka, Mansura, Aorpa and Sumaiya, the path to achieving their dreams is not without struggle. However, despite all their hardships, these girls are full of hope.

On April 26, 75 adolescent girls who are part of the Shornokishoree Network Foundation (SKNF) in Bangladesh – an organization dedicated to empowering adolescent girls and boys – came together in Dhaka to launch Nutrition International’s ‘With Good Nutrition, She’ll Grow Into It’ campaign, which highlights the critical link between good nutrition and empowering girls to grow, learn, earn and lead, all while challenging gender norms and stereotypes.

These girls, coming from different parts of Bangladesh, discussed the barriers they face to achieve their dreams, and what they felt were the biggest obstacles to good health. Fully aware of their reality, limitations and the context they were born in, they spoke with wisdom and clarity  often expected of those much older.

A resident of Khulna district in southern Bangladesh, Priyanka is surrounded by families, including her own, who believe that girls should marry early.

Bangladesh has a high prevalence of early marriage with 1 in 3 adolescent girls getting married before 18.

Early pregnancy and childbirth not only jeopardise a girl’s health and well-being but also put her and the baby at a higher risk of being stunted. When Priyanka was just 10 years old, her parents, under the influence of her uncle, arranged for her to be married. As her wedding date came near, she became aloof in school and was one day found crying by her teacher. Priyanka confided in her teacher, who advised her to go to the District Administration’s office to complain.

“I was very scared as I had never been to any government office. I didn’t know who to meet or what to say. All I knew was that I didn’t want to get married. I went through the gates and a guard on duty asked me why I was there. I broke down and told him and he took me to the Deputy Commissioner. I spoke with him and he promised me that nobody would force me to get married,” Priyanka remembered.

“The officer told me that they would approach my parents without telling them that I had visited the Commissioner’s office. A team of officials then came over to my house, spoke to my parents and told them that it wasn’t just unlawful to get a 10-year-old married, but also cruel to push a child into marriage when she could study and pursue her dreams,” she said.

To her luck, Priyanka’s marriage was averted and her dreams were rekindled.

She now continues to be a bright student and hopes to join the Bangladesh Civil Services. “I want to make sure no child is ever married off. I got timely help but there are many girls who don’t,” she said.

The girls showed a very high level of understanding towards the discrimination and oppression that women and girls face due to their gender.

Mansura, 14 years-old and wise beyond her years, dreams of becoming a psychiatrist.

Growing up in a conservative community, Mansura has witnessed up-close the harassment some women face along with the ensuing trauma they undergo as a result.

“It is especially tough if a woman or a girl suffers from a mental illness. Our society expects us to fit within a certain role and anything outside of that is not accepted. I have seen my mother undergo a lot of hardship as she has had to deal with some mental health issues,” said Mansura.

“As a psychiatrist, I will ensure that women who suffer from mental illness receive proper treatment and have the strength to fight off negative influences in their lives,” she said.

Girls also spoke of discrimination within families with boys being favoured over girls.

“Often girls are seen as a burden and encouraged to remain indoors and stay within defined limits. And sometimes, girls begin to believe that they are inferior. This has to change. Girls can do anything they want especially in a country like Bangladesh that has a woman as Prime Minister.”

Lack of awareness and improper nutrition

‘’Poor nutrition, combined with little knowledge of what constitutes good nutrition, is a major barrier to good health and success,’’ said 15 year-old Aorpa. “There is often too much focus on carbohydrates such as rice and potatoes. Myths around food put entire families at a disadvantage,” she said.

Aorpa also mentioned that in some communities, when a girl is menstruating, she is only allowed to eat very restricted food. ‘’Such restrictions are unfair to girls. This puts them at a disadvantage and often makes them anaemic,’’ she said.

Aorpa said that she had heard of Iron and Folic Acid (IFA) tablets to prevent and reduce anaemia in adolescent girls, but that most girls did not have access to them.

Around a third of adolescent girls are reported anaemic in Bangladesh, and even though the government encourages weekly IFA supplementation for girls, issues remain with procurement and supplies.

Aorpa said that if religious leaders such as Imams were encouraged to speak about good nutrition while interacting with their communities, it could bring about significant change in food habits and knowledge.

“We have to do everything possible to ensure good nutrition for everyone, especially adolescent girls and women as they go through adolescence, pregnancy and motherhood – the stages in life that require proper nutrition to meet the body’s increased needs. We should have strong health care services, school-based awareness activities, door-to-door campaigns and poverty reduction initiatives so that barriers to good nutrition are minimized,” she said.

The role of adolescents

The challenges are many, but the girls are not helpless onlookers. Not only do they want to play a role as change agents, but they also possess great insight into how change may be brought about in their communities.

14 year-old Sumaiya  said that she and her friends could take charge of other girls in their community and make them aware of good nutrition during adolescence. “We can use posters and pamphlets to tell others about anaemia, its symptoms and how to prevent it, she said.

She also said that occasions such as National Nutrition Week, which concluded in April, could be used more intensely to reach out to the families with correct information on diets and nutrition.

“We can help change perceptions. When we speak, people listen because we are one among them. We can promote IFA supplements for girls and speak to their families to let them have these supplements,” she said. “More and more girls are becoming educated in Bangladesh and if each one of us takes on the task of spreading awareness about good nutrition, change is bound to happen.”

These girls display an optimism that change can happen, for some, for all. An optimism which suggests that they can dream freely and have the confidence to rightfully claim their place in this world. An optimism that encourages their dreams because they know they can come true. 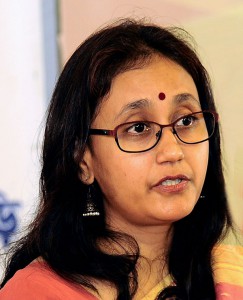 Radhika Srivastava, Regional Communications Manager, Asia, joined Nutrition International in 2013 and oversees the organization’s communications activities in the Asia region. She has significant experience in international development, having previously worked for the World Bank, the World Food Programme and UNICEF. Radhika’s career as a journalist included roles as the associate editor for the India Today group and as a special correspondent for the Times of India. Her articles have been featured in several international publications, including The Lancet and The Sunday Times.