The mandate of lady health workers in Sindh, Pakistan has expanded to include testing and counselling on iodized salt. This could be a game changer to reach vulnerable populations susceptible to iodine deficiency disorders.

The salt production and processing industry is dominated by males, but it is women who are bringing the province one step closer to defeating IDDs.

Lady health workers are part of a national government program to increase health coverage to rural and urban populations, with a focus on maternal and child health. In Sindh, with support from Nutrition International, the frontline workers are being trained to conduct at-home tests that reveal whether the salt used in cooking contains iodine or not. For close to two decades, Nutrition International has been instrumental in advancing the USI mandate in the country by increasing household coverage and consumption of adequately iodized salt. Bringing lady health workers on board is part of Nutrition International’s plans to include more women in USI programming.

“It’s an innovative way of involving females into the whole program,” shared Muhammad Ajmal Khan, Nutrition International’s National Program Manager for USI in Pakistan. “This is not only limited to the involvement of the lady health workers. We are also indirectly involving the females of the households who are cooking food with that salt and learning if it is iodized or not.” 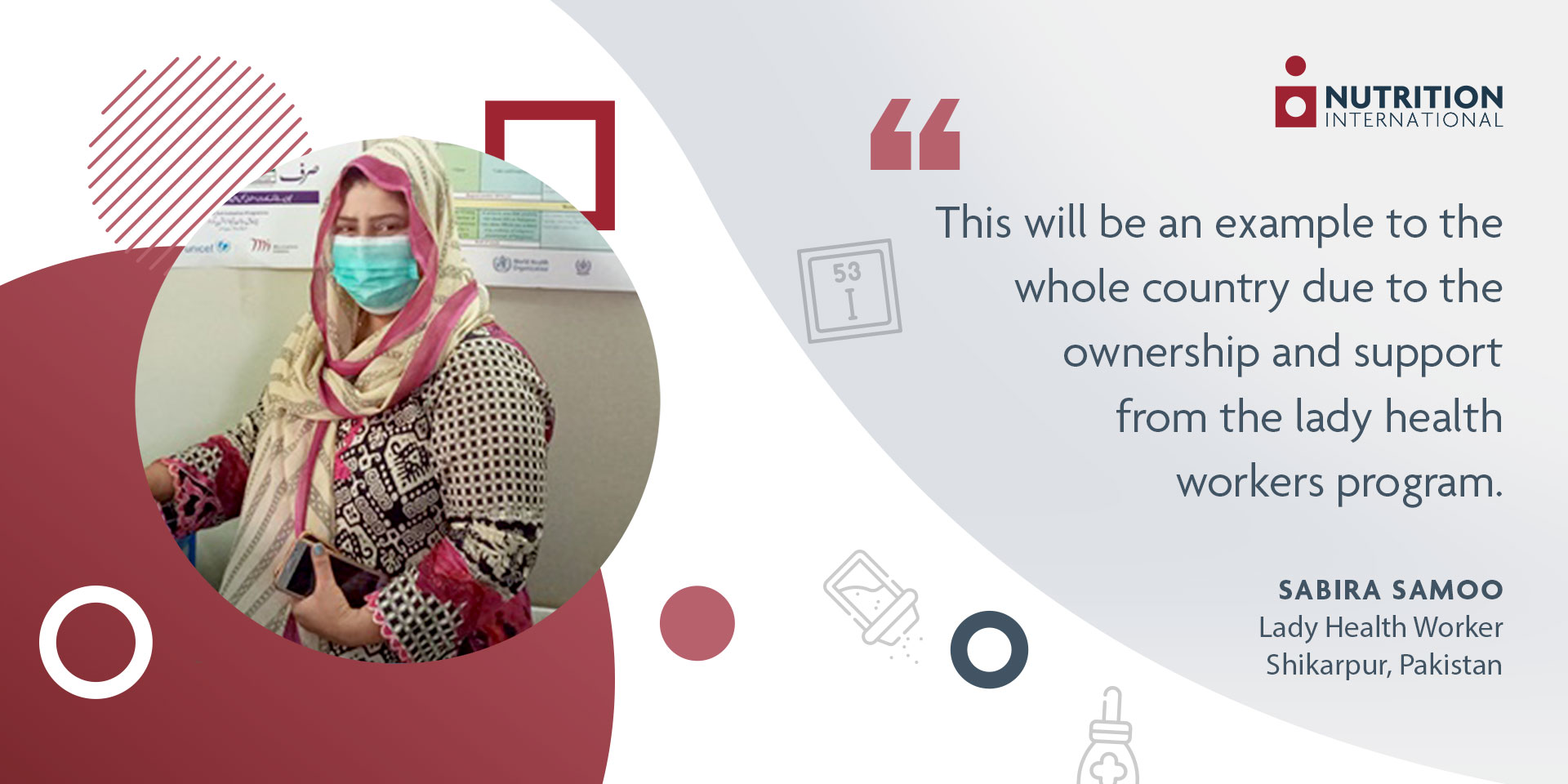 Iodine is an essential micronutrient needed to ensure full brain development and protection from mental impairments. It is processed in the body in small doses on an ongoing basis. When plants and animals are raised in areas with iodine-deficient soil, the diet for people in those areas often lacks the recommended amount of iodine and leaves people at risk of developing IDDs. Iodized salt fills this critical gap.

Nutrition International has been supporting USI in Pakistan since the early 2000s. We have closely supported national and provincial governments to prioritize USI programs, strengthened regulations within provincial food authorities and built relationships with salt producers and processors to increase production and availability of adequately iodized salt. In 2003, 17% of households were consuming iodized salt. By 2018, that had increased to 79.6% of households (84.4% in urban areas and 76.7% in rural areas) as per Pakistan’s National Nutrition Survey 2018.

Nutrition International is targeting the remaining 20%. Gaining the formal backing of lady health workers in Sindh could prove to be a tipping point.

Involving women, who are typically responsible for managing the households and are traditionally the primary shoppers and cooks, has proved challenging in the past. At various level, Nutrition International has tried to bridge the gender gap in USI in Pakistan. “We had tried in the past to involve females in the salt processing itself, but that was not possible,” shared Khan. Cultural barriers prevented their participation. “Then, we tried to involve females as staff members to work in USI. And there, we were a bit successful.” One such hire was Dr. Fatima Saad in 2012.

Dr. Fatima – or Dr. Iodine as she has become known – is Nutrition International’s Provincial Program Manager for USI in Sindh and Balochistan.

“Involvement of women is very important and beneficial because the household cooking department is with the women in our culture,” Dr. Fatima explained. “When we engage women to deliver the message of using iodized salt, it lets us deliver that message in a way that is more appropriate and comfortable. In our society, most of the women don’t come in front of men and don’t come out of the house to talk to male members.”

Dr. Fatima realized the prominence of the problem of IDDs in Pakistan while studying. She knew she wanted to do something about it and wasn’t deterred if that meant being the only female in a room or when visiting a salt mine. “I decided to work in USI and took it as a challenge,” she said. 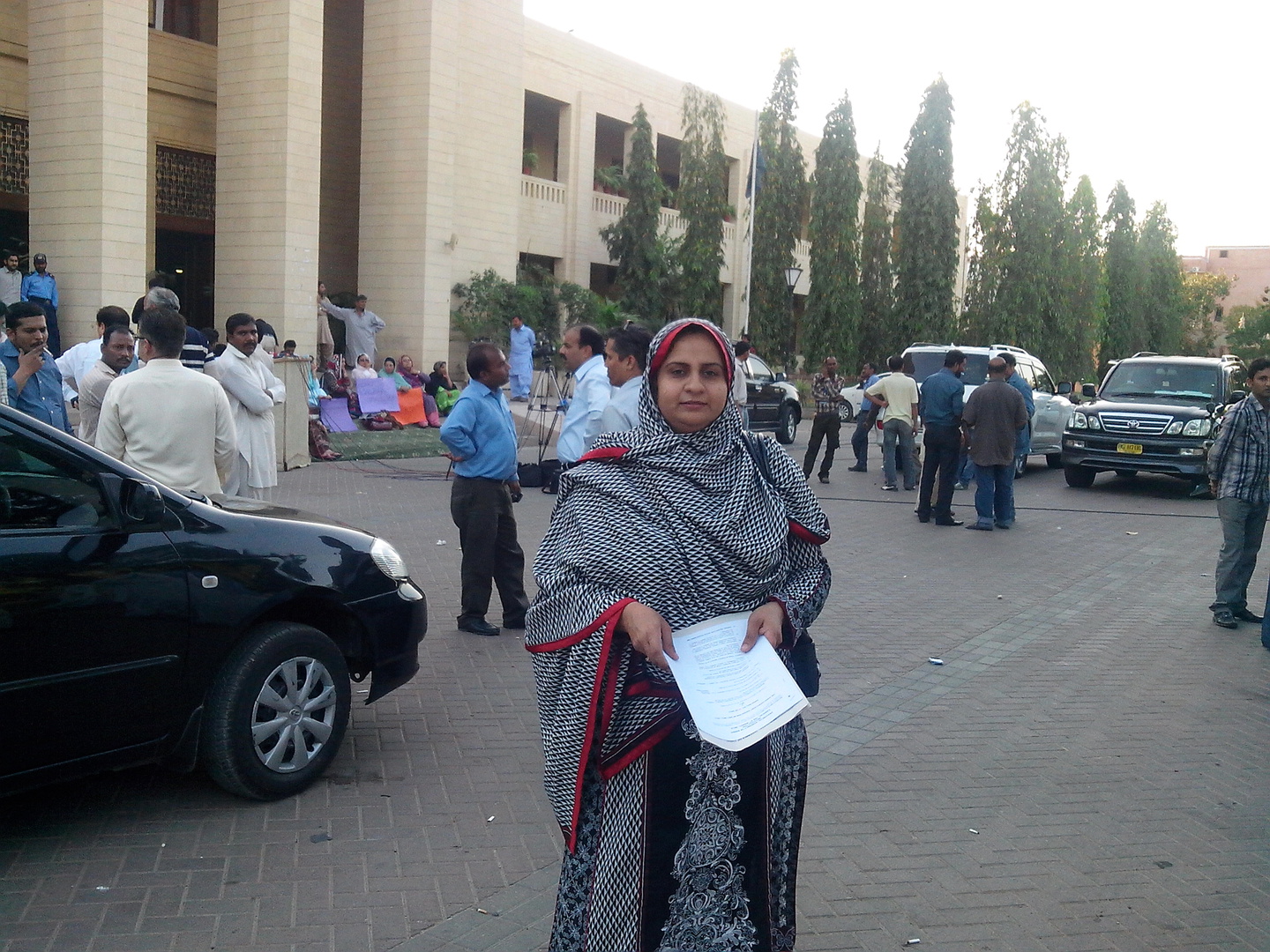 In 2013, Sindh province passed legislation mandating salt iodization with advocacy efforts from Nutrition International. Sindh was the first province, and continues to be the only one, to have passed this form of legislation. “It gave me so much encouragement and motivation to work for the program even more,” Dr. Fatima shared.

Dr. Fatima continued her advocacy efforts. She secured the opportunity to present on IDDs and how to prevent them to the Planning and Development Department. During the meeting she conveyed the need for a multisectoral approach. It was agreed that USI should be incorporated into governmental nutrition projects. This was a big win. In 2018, USI was incorporated into the terms of reference of the provincial government’s Accelerated Action Plan for Health (APP Health).

The next step was securing the participation of lady health workers, a group of roughly 22,000 individuals who are highly respected and trusted in their local areas. “Lady health workers are a medium through which we can directly engage with the community. We can easily communicate our message and achieve our aims because they are going door to door. And with that we can say 100% coverage is possible,” Dr. Fatima said.

As part of this initiative, the government has allocated special funds to buy rapid test kits and train staff.

Every month, lady health supervisors meet to discuss issues and report on their work at the district level. Nutrition International is leveraging those meetings to provide training through district focal points and field officers to equip supervisors with the knowledge needed to train the lady health workers they oversee.

Rubina Soomro has worked as a lady health supervisor in Shikarpur district for nine years. She supervises 25 lady health workers and has conducted five trainings for them on USI. “Iodized salt is available at affordable rates everywhere nowadays,” she said. “This is highly effective to reduce IDDs in our community.” She said the trainings will create a ripple effect and spread awareness, which will ensure households have the information needed to choose iodized salt over non-iodized salt. 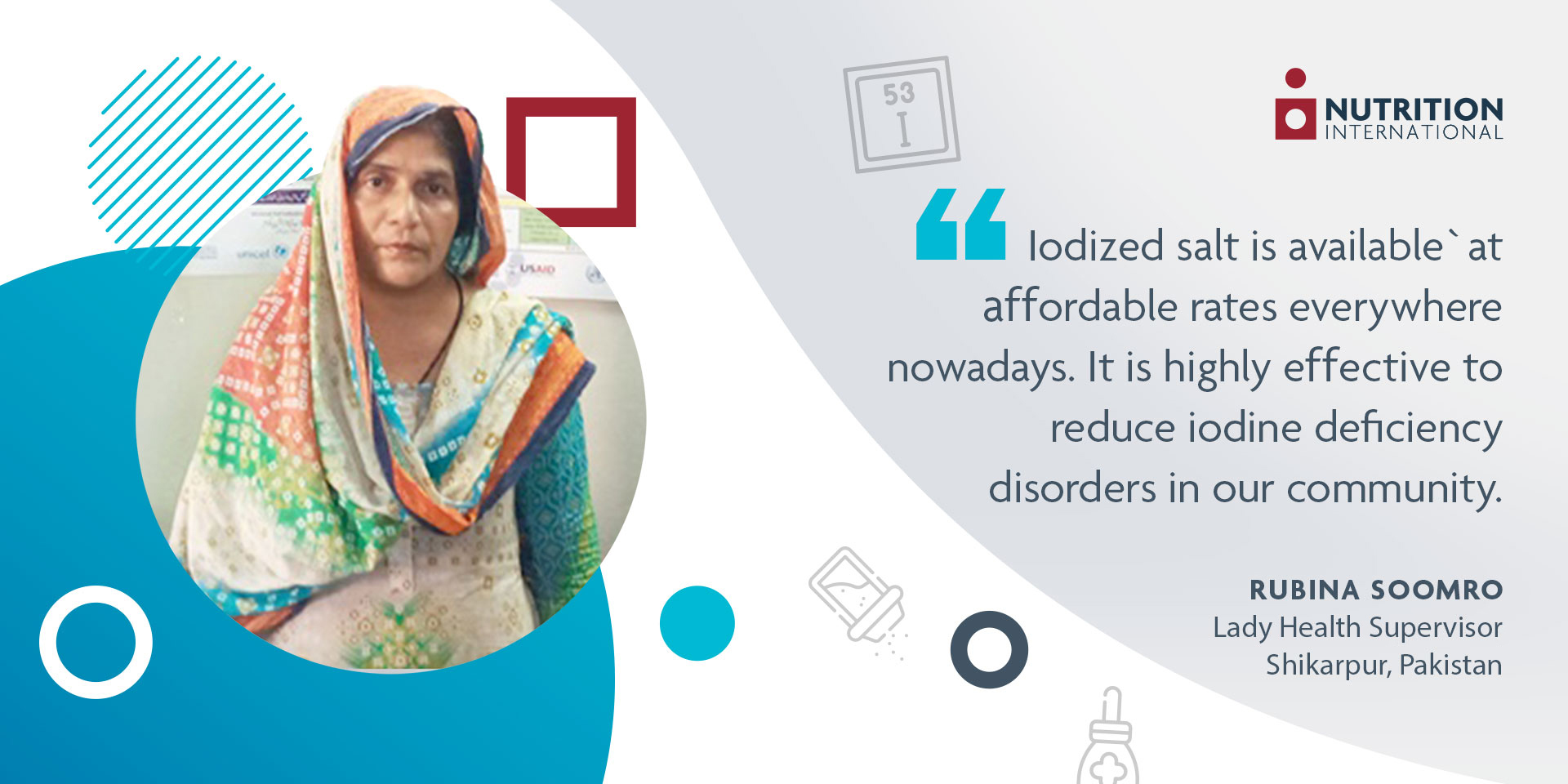 In the same district, Sabira Samoo is a lady health worker with 18 years of experience on the job. “Our community is highly malnourished, so iodized salt is an easy solution to help prevent IDDs.” Being the first province to formally include USI into the mandate of lady health workers, she said, “This will be an example to the whole country due to the ownership and support from the lady health workers program.”

Upon testing, if iodine is not present in the salt, that information doesn’t stop at the household level. It’s relayed back to field officers who engage in a process to notify suppliers, impacting both the supply and demand side.

In looking at the future, Dr. Fatima is focused on improving sustainability. “I have worked a lot and I have served a lot and when I go to the field in very poor areas and people don’t have slippers on their feet, but they are using iodized salt, this is something very encouraging for me. I work hard for that, and I want to make my program more sustainable and successful in my province.”

“We will try to replicate the Sindh model in other provinces and involve lady health workers more and more into our programs across the country,” Khan shared. Nutrition International is also continuing to encourage health departments to hire more female staff in existing positions, such as lab technicians and food safety officers. “We are trying our very best to increase the number of females in the whole program to improve gender imbalance in this area,” Khan said.

Knowledge is power. A trusted source encouraging the use of iodized salt in areas where women were unaware of IDDs will make a difference in the lives of families. It has the potential to make access to and consumption of iodized salt truly universal.